New BIA/Kelsey Insight Paper suggests the adoption of programmatic in the national TV market holds clues to what will drive programmatic ad buying at the local level. 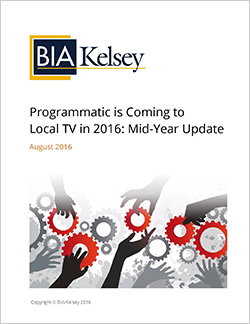 The report features interviews with a panel of industry experts, whose consensus is that significant programmatic ad buying in local television will begin to take off over the next three years, slower at first, and then gaining momentum.

“We’ve seen this pattern in the national television market as well, where programmatic has experienced explosive growth in the past year,” said Rick Ducey, managing director, BIA/Kelsey. “Local television has a number of complicating factors to sort out in order to accommodate widespread programmatic adoption, beginning with lack of measurement reportage—other than age and gender—different workflow software, and there needs to be integration of TV stations and platforms.”

According to the report, BIA/Kelsey expects no more than one to two percent of the local spot television market (estimated by BIA/Kelsey to be worth $21.9 billion) to trade programmatically in 2016. However, the firm’s analysts believe that can ramp relatively quickly, if local follows the example set by the national television market.

Programmatic Is Coming to Local TV: 2016 Mid-Year Update features insights from interviews conducted in June 2016 with a panel of industry experts drawn from agencies, data firms and platform companies. Those interviewed for this mid-year update were from 4C, Cadent, Epsilon, Hubbard Broadcasting, The Media Kitchen, placemedia, Quantum 11 and Wideorbit. This was the second such interview panel convened by BIA/Kelsey this year. A previous panel was interviewed in February with experts from comScore (Rentrak), Experian, Sinclair Broadcasting, STRATA, US Media International and Videa. BIA/Kelsey plans to continue this report series with additional interview panels to be featured in future updates.

In addition to the expert panel insights, the report includes a brief historical perspective of programmatic TV and highlights current platforms. More information about Programmatic Is Coming to Local TV: 2016 Mid-Year Update, including how to purchase, is available at http://bit.ly/ProgrammaticLocalTV. BIA/Kelsey content subscribers will receive the report this week.

BIA/Kelsey Survey: Plus Spending SMBs Increasing Their Ad Budgets in 2017 to Include Over 20 Different Media

Proprietary survey of small to medium-sized businesses (SMBs) that spend at least $25,000 a year on…

Series Is Examining What the Vertical Ad Spend Pie Looks Like In 2021 Chantilly, VA/Westerville,…