CHANTILLY, Va. (March 28, 2017) – The digital advertising income of U.S. radio stations continued its ascent in 2016, as the industry reported a 14 percent increase in online revenues, compared with only a slight bump in over-the-air income, according the first quarter edition of BIA/Kelsey’s 2017 Investing In Radio® Market Report.  Washington, DC all-news station WTOP-FM was the top revenue-generation station, taking in $67.5 million in advertising revenues as the overall industry over-the-air advertising revenue stayed relatively flat at around $14.1 billion. The news-talk category experienced an overall improvement in 2016, likely due to the presidential year. 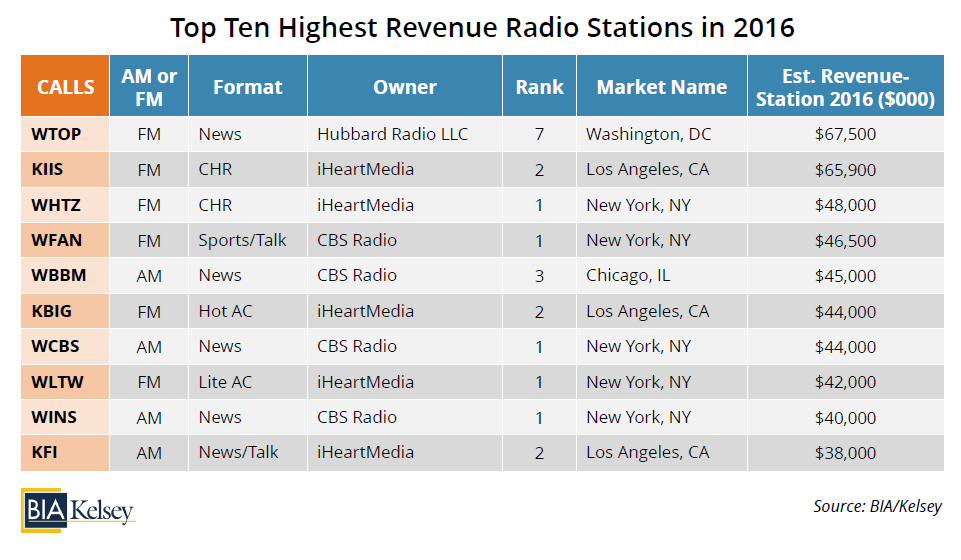 “In an age where consumers have many entertainment choices, local radio maintains its strength and popularity in the marketplace among national and local advertisers,” said Mark Fratrik, SVP and chief economist at BIA/Kelsey. “Our forecast also notes that by 2021 we expect radio to surpass newspapers and become the fifth largest media category among advertisers.”

Fratrik added that the prospects for 2017 remain similar, with OTA revenues increasing less than one percent and online about 12 percent. BIA/Kelsey forecasts that the radio industry’s revenue in 2017 will reach a total of $14.9 billion, representing 10.5 percent of the $148.8 billion U.S. local advertising marketplace as estimated by BIA/Kelsey. 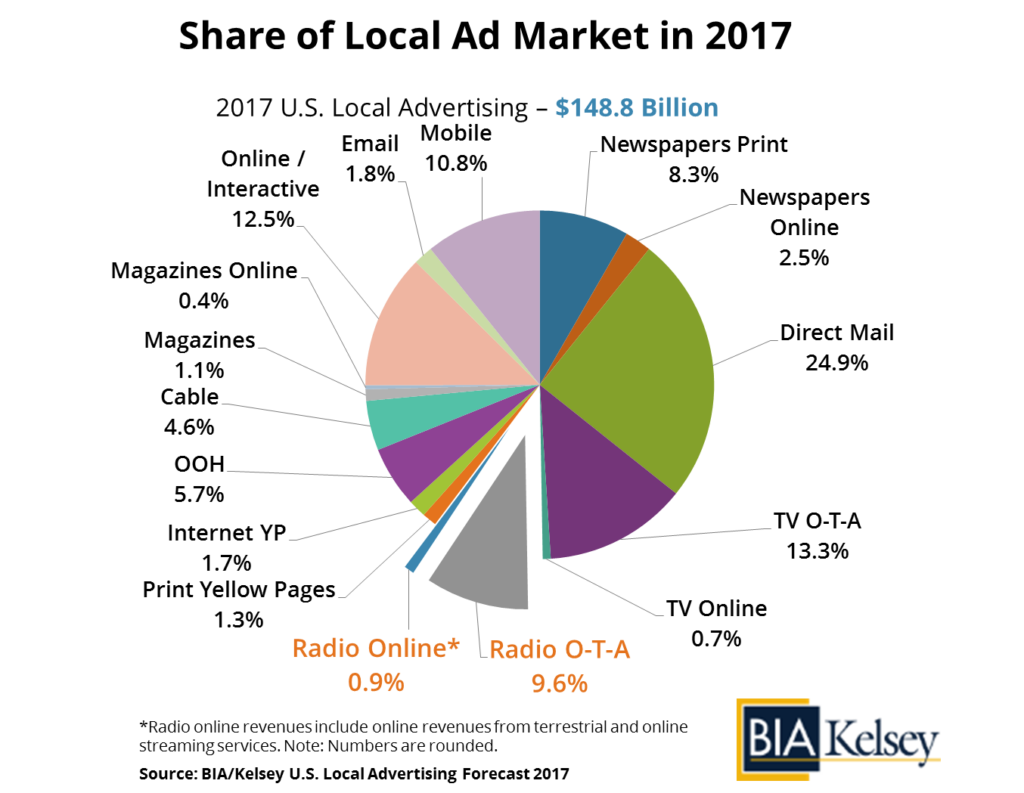 More promising this year over last are radio transactions and station sales. With the February announcement that Entercom and CBS Radio will be combined into one company, after regulatory approval, the industry will experience renewed activity due to the sale and realignment in some markets. In 2016 the market was slow, with 556 station sales and nearly $500 million in transactions across the industry.

“We are encouraged by the Entercom purchase and how it will affect the competitive landscape,” Fratrik said.  “The combined group will be closer to the size of industry leader iHeart Media and we expect the transaction to have a positive effect on radio since both organizations are progressive and well-run.” In February, Fratrik commented on the proposed merger in a blog post, “ENTERCOM – CBS: What Does it Mean?”

A complete profile of every Arbitron-rated market, with historic and projected demographic and financial statistics, is available in the 2017 first-quarter edition of “Investing In Radio® Market Report,” which is available for purchase now. Information in the Investing In books is also available in Media Access Pro™, a data and analytical service that delivers comprehensive information on the radio, television and newspaper industries.

BIA/Kelsey’s forecast methodology is based on actual estimates of local online market advertising revenue totals. Estimates are solicited from local radio stations and knowledgeable local market experts. To provide an accurate review of the advertising marketplace, the model does not include revenues of e-commerce sales through daily or weekly deal campaigns.

In addition to its radio, television and newspaper industry forecasts, BIA/Kelsey offers both nationwide and local market advertising forecasts. Details can be found here. In April, BIA/Kelsey will launch a new product for the local media industry called ADVantage that will provide online access to all of the firm’s forecasts, including the forecast included in the Investing In Radio publication, offering subscribers a direct view of national and local market ad spending. For more details, email mailto:advantage@biakelsey.com.

BIA/Kelsey (@BIAKelsey) combines data, analytics and insights to provide its clients with the information they need for grounded financial and strategic action. Since 1983, BIA/Kelsey has been a valuable resource for many of the leading companies in media and the financial and legal community serving media and telecom, as well as the FCC and other government agencies. Today, BIA/Kelsey offers a broad range of research, consulting services and conferences to traditional and new media companies. Learn more about BIA/Kelsey at www.biakelsey.com.

Additional information is available at http://www.biakelsey.com, on the company’s Local Media Watch blog, Twitter, and Facebook. Sign up for one of the company’s three newsletters: Local Media Daily, Local Tech Daily or Local Commerce Daily that cover different areas of media and technology.

Overall U.S. Local Media Ad Revenues to Reach $151.5B in 2017, Lifted by Faster Growth in Online/Digital

Location targeted mobile advertising will account for more than half of overall U.S. mobile ad…