CHANTILLY, Va. (Feb. 1, 2018) –  Local advertising on mobile devices sold by pure-play mobile providers will rise this year to $19 billion, according to BIA/Kelsey’s U.S. Local Advertising Forecast 2018: Mobile and Social estimates. An additional $3.1 billion in mobile advertising is being sold by traditional media companies (i.e., radio, television and newspapers) in 2018.

With increasing consumer and SMB adoption and its ability to reach targeted audiences, the mobile/social category will be the third largest ad platform in 2018, behind direct mail and local television. Of the overall $151.2 billon estimated U.S. local advertising spending for the year, pure-play mobile will represent 12.6 percent of the local advertising spend and is on a pace to reach 19.2 percent, and the second top spot, by 2022.

“We are very positive about local advertising on mobile devices to increase significantly in the next decade. As mobile continues to mature, national and small business advertisers see its effectiveness and ability as an all-encompassing platform to reach their audiences,” said Mark Fratrik, chief economist and SVP at BIA/Kelsey. “Mobile has become a preferred platform for the advertising dollar because of its ability to capture audiences of all ages based precisely on where they are and what they are doing, at any given moment.” 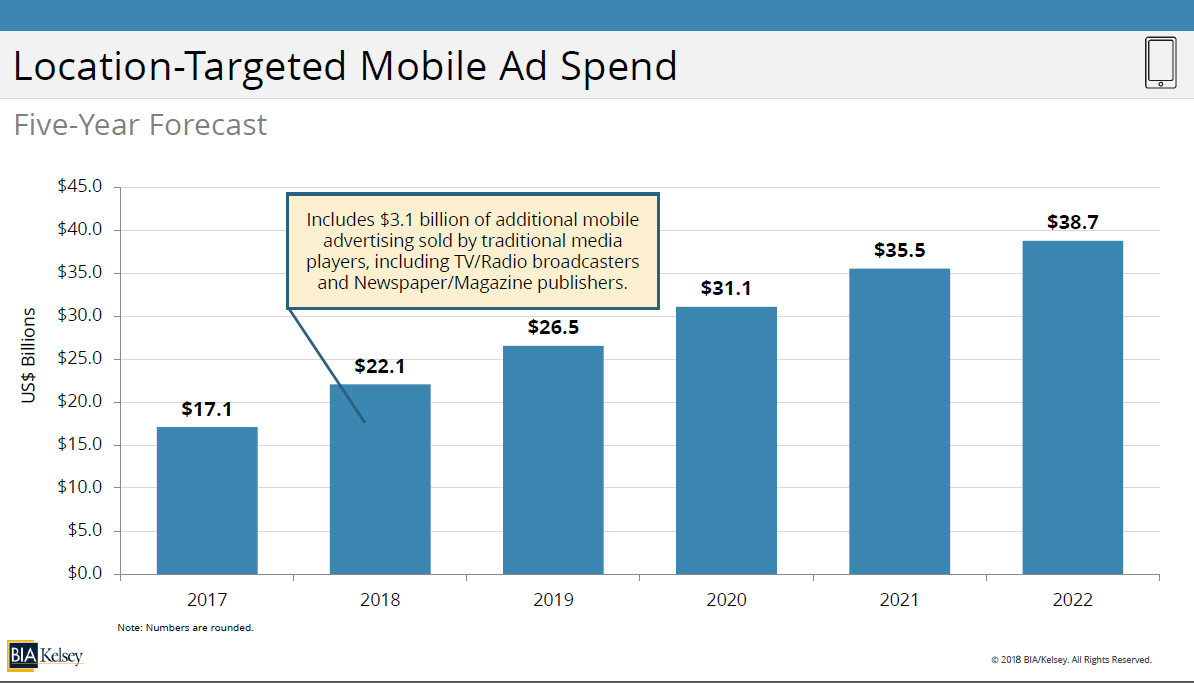 BIA/Kelsey has continued to expand its research and analysis on the entire local advertising landscape, including each of the top 12 media platforms, and produces both a nationwide and local market forecast across each media for the current year. The forecast for each segment is based on in-house data going back to mid-2000.

Social media ad revenue from mobile (not including tablets) now represents slightly more than 70 percent of total social ad spending, and will grow to 80 percent by 2022 as more social engagement continues to shift away from desktops. Facebook is expected to receive the lion’s share of those dollars followed by Twitter, Snap, LinkedIn, and other popular apps. Further, location targeting advertising within mobile sold by all providers (which includes pure play, radio, television and newspapers) is projected to grow from $17.1 billion in 2017 to $38.7 billion in 2022, a 17.8 percent compound annual growth.

About the U.S. Local Advertising 2018 Forecast: Mobile and Social

The Mobile and Social Forecast, along with the forecast for other media segments, is available in the firm’s online dashboard, BIA ADVantage, which provides the full U.S. Local Advertising Forecast both nationwide and for 12 media, along with other industry data and analysis. The forecast can also be purchased separately.

For information on becoming a BIA ADVantage client, contact Mark Giannini, COO and SVP, business development, at mgiannini@biakelsey.com or (703) 818-2425.

Report explains each major step of AT&T’s investment in video and digital advertising, along with…

BIA Revises its U.S. Local Advertising Revenue Forecast Down to $144.3B Due to Coronavirus Impacts

BIA estimating a double digit decline nationwide across all U.S. local advertising from its original…