CHANTILLY, Va. (April 20, 2017) – Retransmission consent agreements between local television stations and cable/satellite companies contributed to total industry revenue in 2016 of $28.4 billion, according to estimates from BIA/Kelsey. Last year, stations received approximately $6.8 billion from retransmission agreements made individually or through ownership groups with cable and satellite providers in every market. Adding to this revenue, local television benefitted from increased election advertising in numerous states and also experienced double-digit growth through its digital media offerings. The new television forecast, including new retransmission consent data, is available in the firm’s first quarterly market report for television and in its software database, MEDIA Access Pro.

“The dependence on retransmission fees has become incredibly important to local stations and many publicly traded ownership groups because it amounts to nearly one-third of their revenue,” said Mark Fratrik, SVP and chief economist at BIA/Kelsey. “The fees provide a sound financial basis for the stations and have also become the foundation for many of the larger stations. Our analysis also uncovered that even mid-size and smaller market stations are increasingly relying on the income provided by these fees.”

For the first time, BIA/Kelsey’s Media Access Pro™ and its sister publication Investing In Television Market Report includes retransmission consent estimates on local television. Although the agreements are not made public, BIA/Kelsey developed a modeling formula that used its public information and industry knowledge to provide a deeper examination into the revenue streams for each station.

The firm’s new estimates predict that on a market-by-market basis, retransmission fees will continue to rise over the next five years, based on specific household growth rates, as well as expectations on price increases and consumer behavior.

Additionally, television has been experiencing strong growth in over-the-air (OTA) revenues, which is attributed to local television’s continued ability to reach high concentrations of the population. While presidential years typically add an uptick in advertising, it appears that statewide and local races, in particular, added significantly more to station revenues. Three such markets include Reno, NV; Charlotte, NC; and Springfield, MO where advertising revenue increased by more than 30 percent in 2016. The industry’s OTA advertising revenue increased by 11.4 percent in 2016 but in 2017 BIA/Kelsey predicts that OTA revenue will decrease by 4.1 percent. 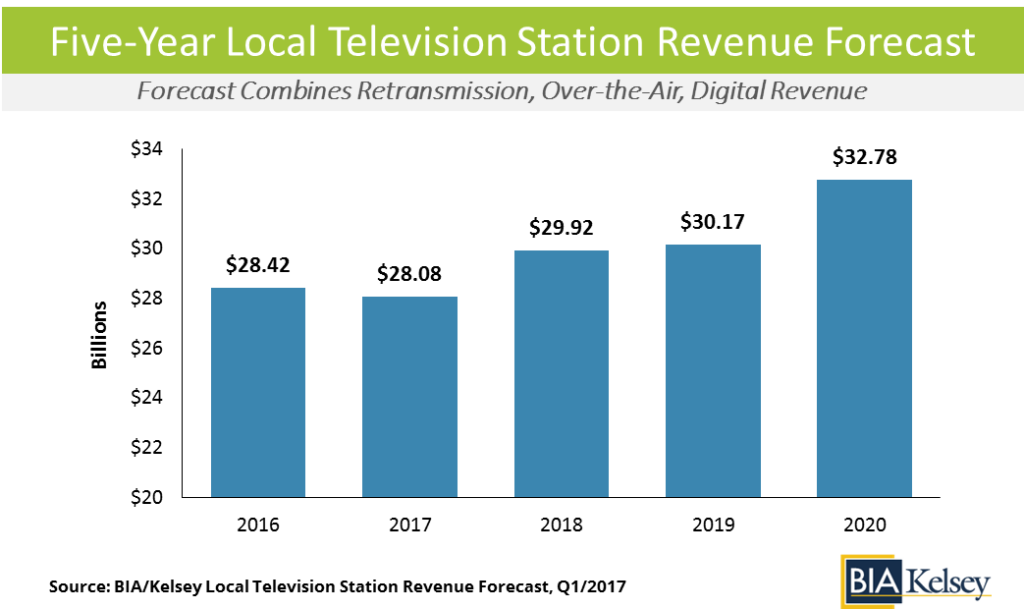 “Stations continue to embrace the digital innovations that bring them viewers and that effort is paying off in increased local ad revenues,” said Fratrik. “The local television markets are remaining healthy and will remain that way in the foreseeable future as long as they continue to improve their news, weather and programming options across all channels.”

Information in the Investing In books is also available in Media Access Pro™, a data and analytical service that delivers comprehensive information on the radio, television and newspaper industries. Individual on-demand television market reports are also available with station competitive and performance information, including estimated advertising revenues, technical data, ownership and acquisition information, and more.

For more information on BIA/Kelsey’s Investing In publications or MEDIA Access Pro, (703) 818-2425 or email info@biakelsey.com.

BIA/Kelsey (@BIAKelsey) combines data, analytics and insights to provide its clients with the information they need for grounded financial and strategic action. Since 1983, BIA/Kelsey has been a valuable resource for many of the leading companies in media and the financial and legal community serving media and telecom, as well as the FCC and other government agencies. Today, BIA/Kelsey offers a broad range of research, consulting services and conferences to traditional and new media companies. Learn more about BIA/Kelsey at www.biakelsey.com.

Additional information is available at http://www.biakelsey.com, on the company’s Local Media Watch blog, Twitter, and Facebook. Sign up for one of the company’s three newsletters: Local Media Daily or Local Tech Daily that cover different areas of media and technology.