CHANTILLY, Va. (Sept. 20, 2016) – BIA/Kelsey, the leader in broadcasting research and valuation, has conducted an independent evaluation of CBS Radio Inc. as it approaches its IPO. In this 60-plus-page report, “CBS Radio As It Approaches the IPO,” BIA/Kelsey provides insights into local advertising in the U.S. and in each of the 26 markets where CBS Radio operates, and offers a valuation of CBS Radio under multiple approaches. 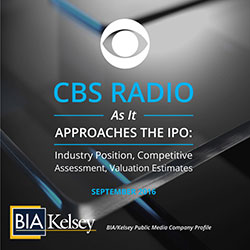 In 2015, CBS Radio ranked second in U.S. radio revenue at $1.2 billion, generated by only a fraction of the number of stations owned by number-one-ranked iHeartMedia, with $2.6 billion. The reason CBS Radio generates such large revenue given its relatively small number of stations is that it is concentrated in the major markets. CBS Radio has dominant clusters in the eight largest radio markets in the nation and in many of its smaller markets.

“CBS Radio has been in the commercial local radio business since the inception of radio stations in the U.S.,” said Tom Buono, CEO, BIA/Kelsey. “It has a long history of developing national and local entertainment and news programming. Much of that national programming migrated over to the television industry, but CBS has always had a commitment to strong local radio programming and that steadiness has been rewarded by strong ratings and local station revenues.”

In the new report, “CBS Radio As It Approaches the IPO,” BIA/Kelsey evaluates the new CBS Radio Inc. in the context of the constantly changing local media marketplace. In the report, BIA/Kelsey reviews the overall radio industry and provides a focus on CBS Radio, how it is positioned against its radio competitors, and how it is faring against other advertising platforms. The report also estimates the current value of the existing CBS Radio properties and entire company through alternative valuation techniques – guideline company analysis, discounted cash flow, and an examination of comparable radio station group sales. BIA/Kelsey concludes the report with an overall assessment of CBS Radio as it returns to being a separate radio-only public company.

Commenting on this first in a series of public media company profiles BIA/Kelsey plans to publish, the company’s Chief Economist Mark Fratrik said, “As CBS approaches its initial public offering, we thought it important for BIA/Kelsey to share our views and proprietary data collected over 30 years. Our aim is to offer an insightful, meaningful assessment of this important business transaction for executives and analysts who are involved or invested in the radio industry.”

This report may be purchased online at https://shop.biakelsey.com/product/cbsradio.

Location-Targeted Mobile Advertising Projected to Reach $6.6 Billion in the U.S. in 2015

New report examines the challenges of multi-location advertising in the mobile age; offers a view…

Companion webinar on Aug. 9 will look at how solution providers can expand their product…