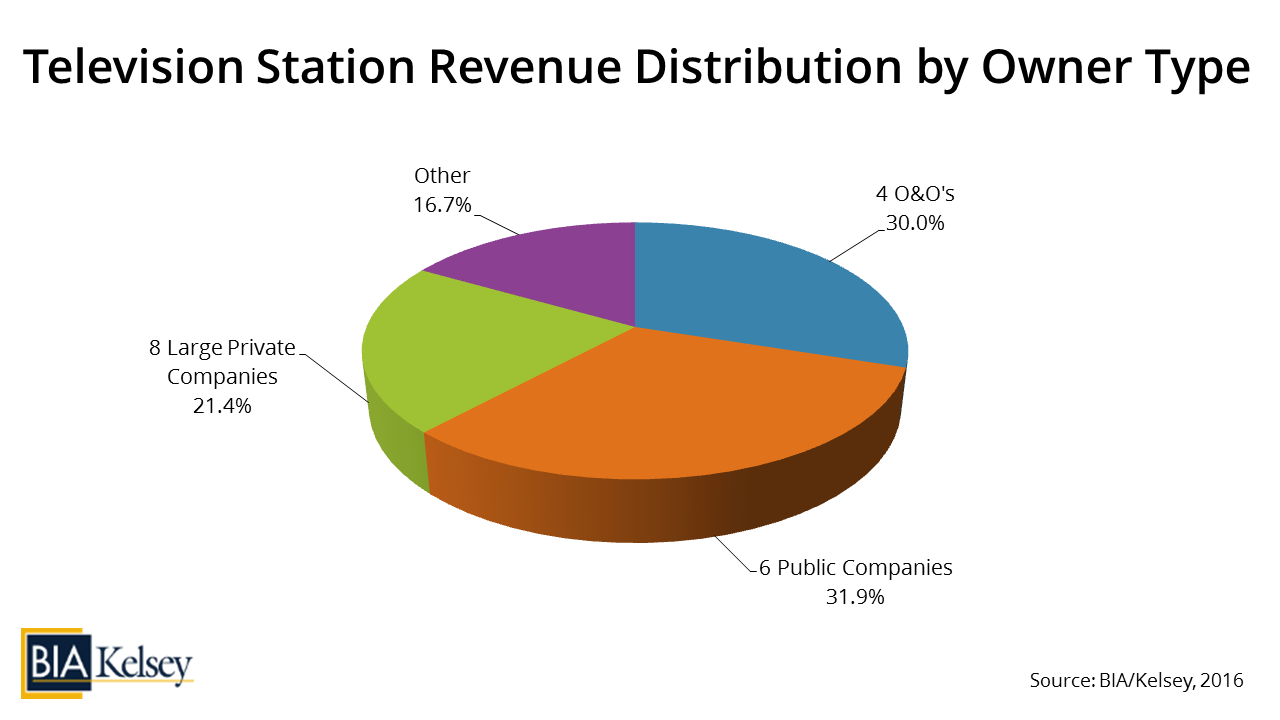 “It’s incredible that 18 groups that represent just over 50 percent of the number of commercial stations earn over 80 percent of the revenue for the entire industry,” said Tom Buono, CEO of BIA/Kelsey. “These 18 groups, competing against each other in the local markets, generate a large share of the total local television station industry revenue through the operation of strong affiliates in these local markets.”
Of the $25.8 billion in gross revenue generated by these groups, $6.5 billion will be generated from retransmission consent revenue and over $1.1 billion will come from online/digital activities.

In its recent U.S Local Advertising Forecast 2017, BIA/Kelsey reported that total online/digital advertising in 2016 will be approximately 31 percent of total local advertising. Traditional media and television operators, in particular, are continuing to face competition from digital platforms causing media shares to continually adjust as online attracts a bigger share of advertising dollars.

A comprehensive examination of online/digital adverting will be a focus of BIA/Kelsey’s upcoming conference, BIA/Kelsey NEXT: The Future of Local Digital Advertising and Marketing, which takes place December 5-7, 2016, in Boston. Sessions will include, “Modern Local Media Measurement,” “Best Practices for Driving Local and Location-Based Buyers,” and a case study of how a location-focused programmatic video solved local marketing challenges.

Visit http://www.biakelsey.com/NEXT2016 for complete conference information, including the agenda, speakers and online registration.

The report, “Television Broadcasting 2016: Current Assessment and Future Outlook,” delivers a comprehensive overview of the television industry by examining the current environment for television broadcasting and those factors that will drive the industry going forward.

The 45-page report covers trends in local advertising and the shift to digital; political advertising; retransmission consent; the spectrum auction; ATSC 3.0 and much more. It includes an assessment of what the television industry and its potential value in 2020 and addresses a number of current and relevant questions:

Examining the current situation and those factors impacting this industry, this report contains BIA/Kelsey’s take on what each of these factors will mean for the industry and its potential strength and value in 2020.

The report is designed for anyone interested in what is going on in the television industry. In particular, the report is oriented towards industry executives, analysts and investors contemplating potential investment in the industry.

The report can be purchased online.

About BIA/Kelsey
BIA/Kelsey (@BIAKelsey) combines data, analytics and insights to provide its clients with the information they need for grounded financial and strategic action. Since 1983, BIA/Kelsey has been a valuable resource for many of the leading companies in media and the financial and legal community serving media and telecom, as well as the FCC and other government agencies. Today, BIA/Kelsey offers a broad range of research, consulting services and conferences to traditional and new media companies. Learn more about BIA/Kelsey at http://www.biakelsey.com.

Shift from Media to Marketing Services to Frame Discussions at BIA/Kelsey SMB Conference, Sept. 29-30, in Denver

Digital Revenues for U.S. Radio Industry Continue to Rise As OTA Numbers Remain Steady at $14.1 B in 2016, According to New BIA/Kelsey Report

News/Talk Category Bumps Higher for the Year, As Hubbard’s WTOP-FM Retains Lead Spot among the…